Gisela: When you think of Thai food culture – what is most exceptional about it?
Pratarn: Actually I’m an expert of street food. But speaking of Thai Food, like Thai culture, it has a certain hierarchy. There is food for the royal family, food for the elite and food for the street people. But every category is very attractive for its own. I don’t know if anyone already told you about the word “family”? Family in English comes from the Latin word familia which means you look alike so you belong to one family. You have something in common with your brother and that means you are a family. In Thai we call it crop crua – crua means kitchen, crop means to cover – family is something to cover the kitchen – which means we really love eating!

So the centre of the family is the kitchen. In the traditional Thai society the kitchen was the centre and the cluster family was living close by the kitchen. So when you have a new family, you just build your house around the kitchen. And in the evening they all come together and have dinner together in the kitchen. Which means food has a very significant role in Thai society. Of course we have some exchange from history – Portuguese people came and they exchanged recipes. So some of the Thai desserts have Portuguese roots. This kind of things happen all around the world. Ice cream originated from China and the Italians discovered it and modified it, to invent their world famous ice cream. I think food is the bond in Thai society. We share food to make friends and to join together.

How did you become a Street Food expert?
I like niche markets I don’t like block buster movies. I can watch commercial movies but I prefer the off–mainstream. Therefore I also don’t like mainstream food. I don’t like franchise restaurants, I don’t like highly frequented restaurants. I like everything tailor made, everything made one by one, everything very delicate. So I am looking for restaurants that people never cared for in Bangkok. Every month or even every week I will discover a new one and call people to share. Something like the one table shop. It’s in the secret market in china town. You have to go to a very dark corner in this crowded district – it’s hard to find, but once you found it, you will be very surprised: there is only one table! You have to call the owner and tell him how many people will come, and he will set the menu, maybe five or ten people. You can’t choose from the menu. You might say you want some seafood or vegetables but then the chef will create his own recipe. It will always be a pleasant surprise. All the dishes will have some kind of vision. For example one recipe he created some years ago, when people called him at midnight: He just took whatever he found in the kitchen and made fried rice – and that is now one of his most popular recipes.

Do you think street food culture will remain the same in the future?
I think everything will become more commercial. Because once you have to make profit, once you see your business is not earning enough – you have to make it 100 tables – not one. You will probably earn more, but you will also loose something, because this is not only about money but also about spirit. The appeal of street food is, that its is a soulful activity and it creates the soul of the city. For me Bangkok – without street food – will loose its own identity.

But do you think street food will disappear?
It might happen in some places. Because the real estate development, the building owners, do not want anybody to sell food or other goods in front of their million dollar buildings or somewhere close by.

But all people like it, everybody goes to eat on the street and enjoys it!
Yes we really like it. Street food is very popular because people have choices and you can stay in your neighbourhood. You can have noodles and then you eat steak and you can have a big variety of beverages. You feel free, you get fresh air especially at night– and most importantly it is very cheap.

Street food stalls can be found everywhere in Bangkok on streets, paths and walkways. But actually it’s all against the law. Also there is no rent paid. Most of them will stay and occupy public space. That’s the way Thai people lived for a long time. Now this spirit of sharing space is fading away. People start to be westernized and try to bring things to an order. But Bangkok is a chaos city – we don’t like order! You can experience this when you walk around here – you can easily get lost. So whenever we try to bring this city into an order, we will fail. This is an organic city and everything can grow– it’s more fun!

Is the food culture also getting more westernized? For example selling food like pizza and cakes? The international food brands try to establish food like pizza or fast food. They market it as a more expensive category than street food. In opposite to Europe where fast food is typical street food.

But I also saw really strange pizzas with sausages and mayonnaise on top. They`re like the fake bags of Louis Vuitton – which makes the real pizzas even better.

In the beginning you divided Thai food into three sections. Yes high class, popular and street food. Popular food would be Pad Thai (fried noodle) or Tom Yum Gung (spicy soup with seafood). Something which is mainstream. Its not really street food. Typical street food is noodle, Som Tam (spicy mango salad), food on sticks, Kao Man Gai (chicken and rice). High class would be something from the palace. Actually it is almost the same kind of food, but it comes with ornaments, with decoration – you carve the cucumber and make flowers out of pumpkin.

So it’s how it is served what makes the difference between high class and mainstream? Yes to make the dining more ritual, but I think in terms of the banquet culture the European culture is more sophisticated. Not so long ago, Thai people didn’t use forks and spoons – we used the hand. Also we don’t have isolated plates. We just have rice and all the food to be shared.

But that makes it so appealing to me. In Europe it’s so boring to have your one plate. Yes and I always want to eat yours. The public does not allow me to steal your food, too bad but I can’t order the same, because then it’s too much for me. Really it’s so much nicer to share the food. 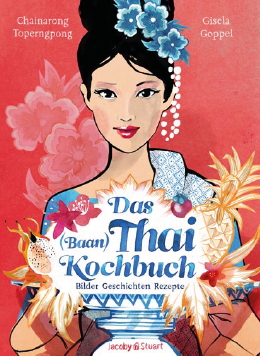